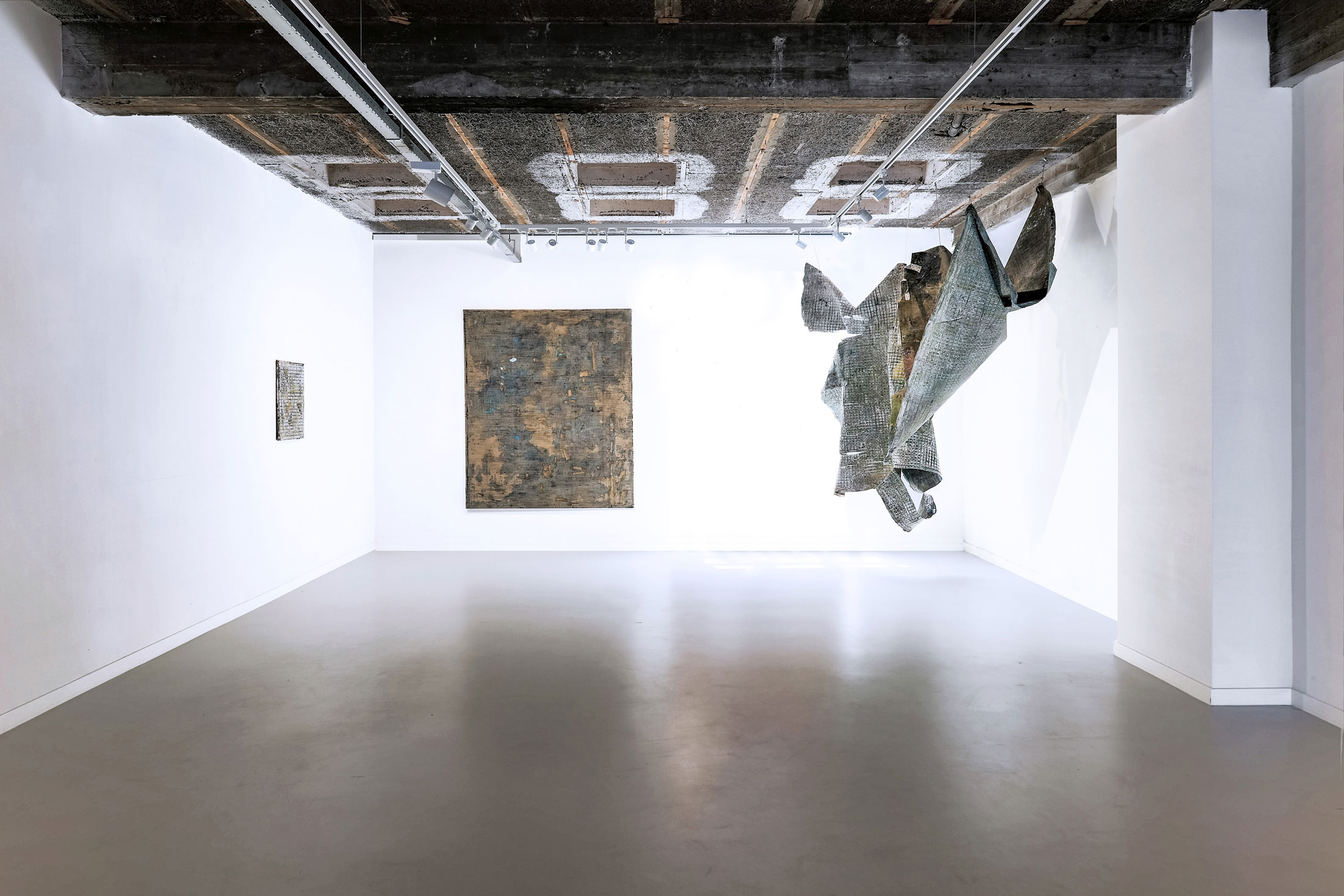 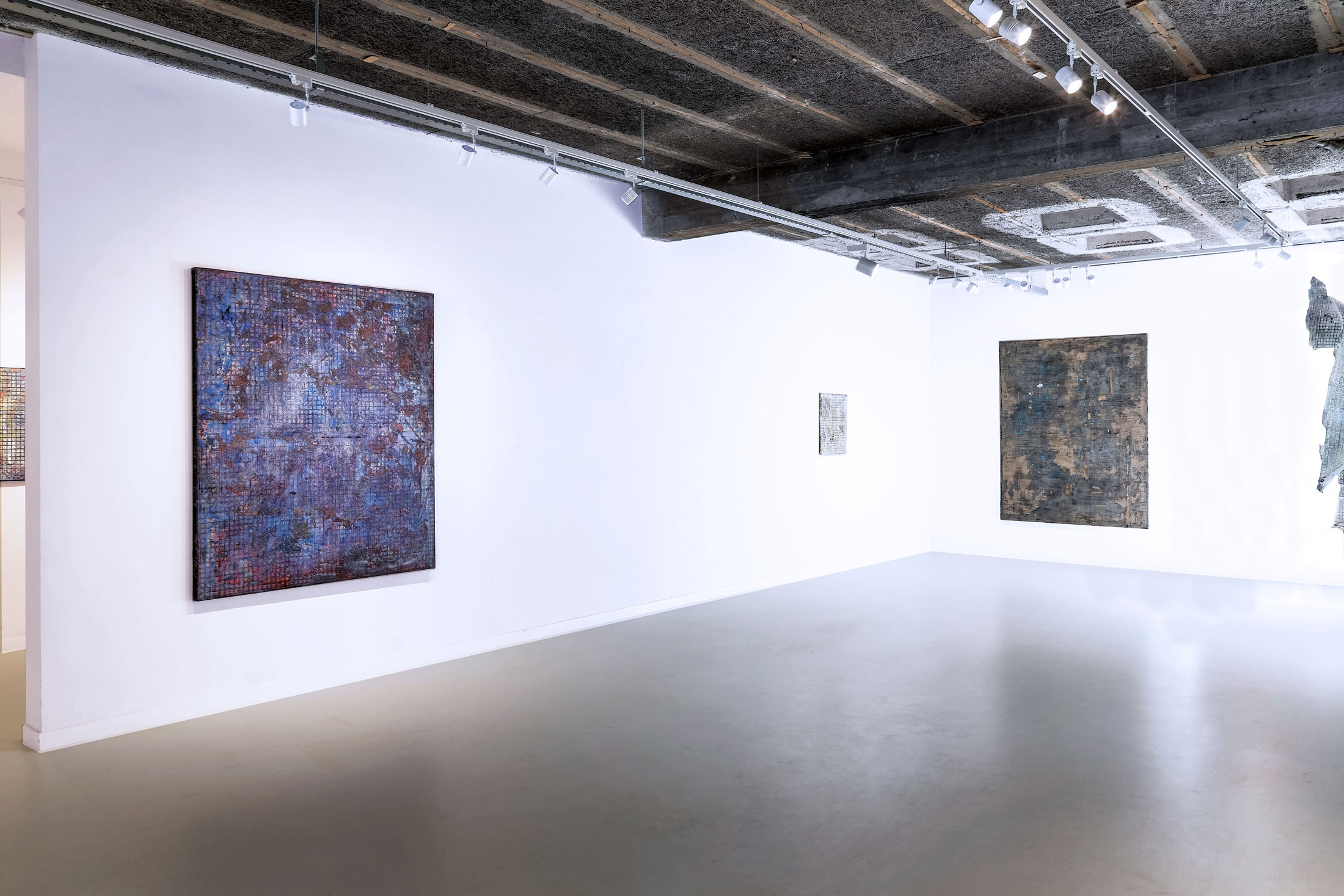 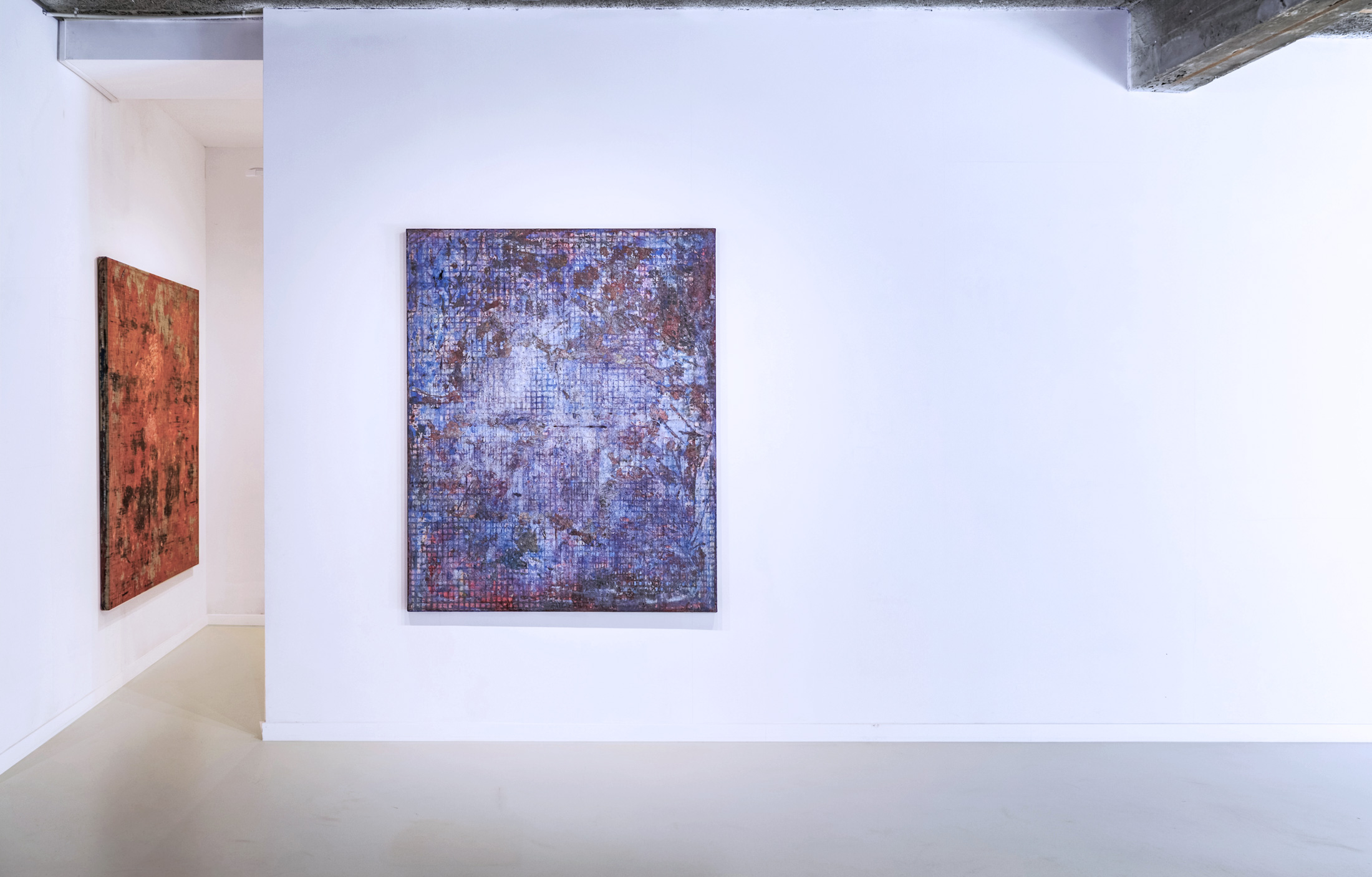 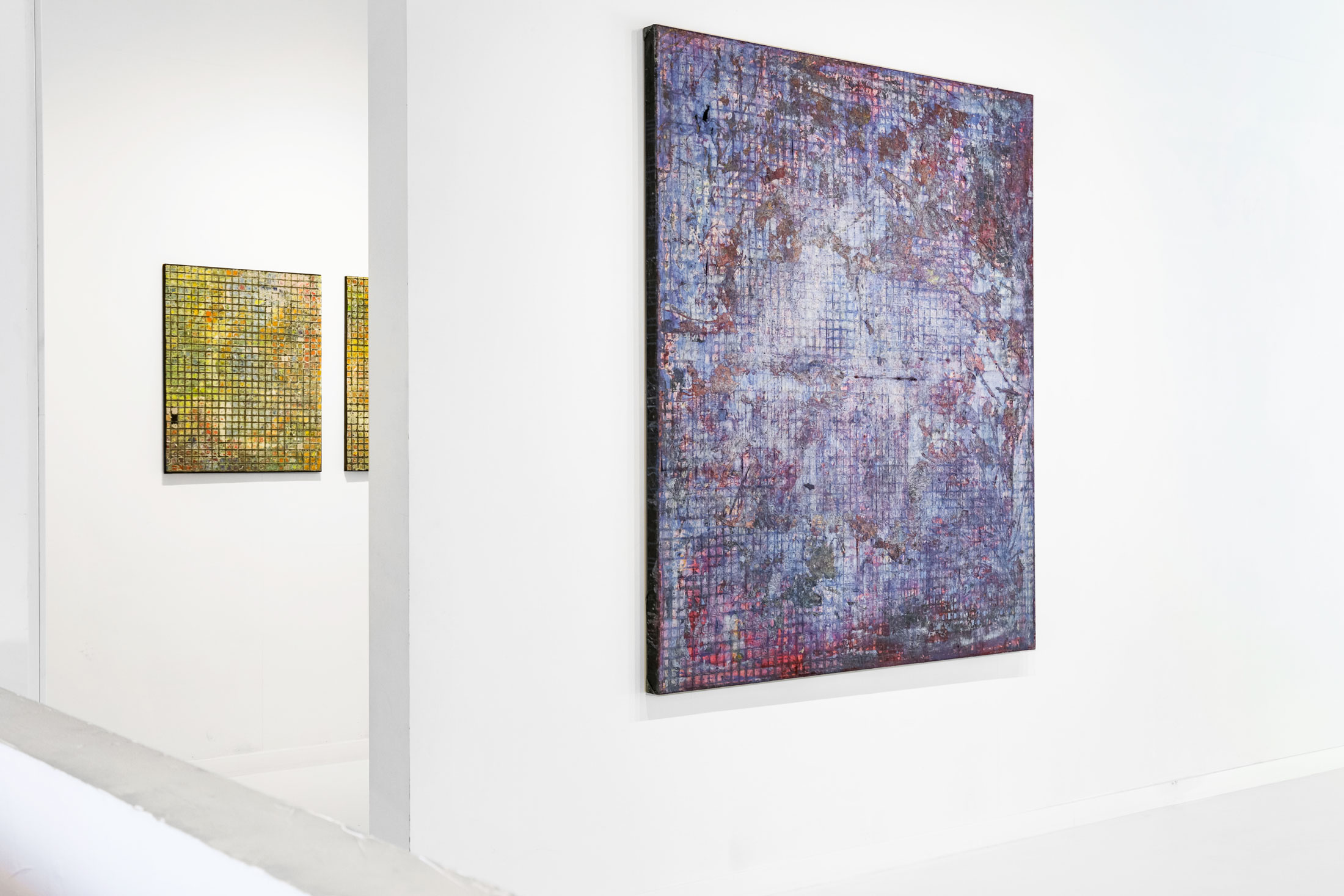 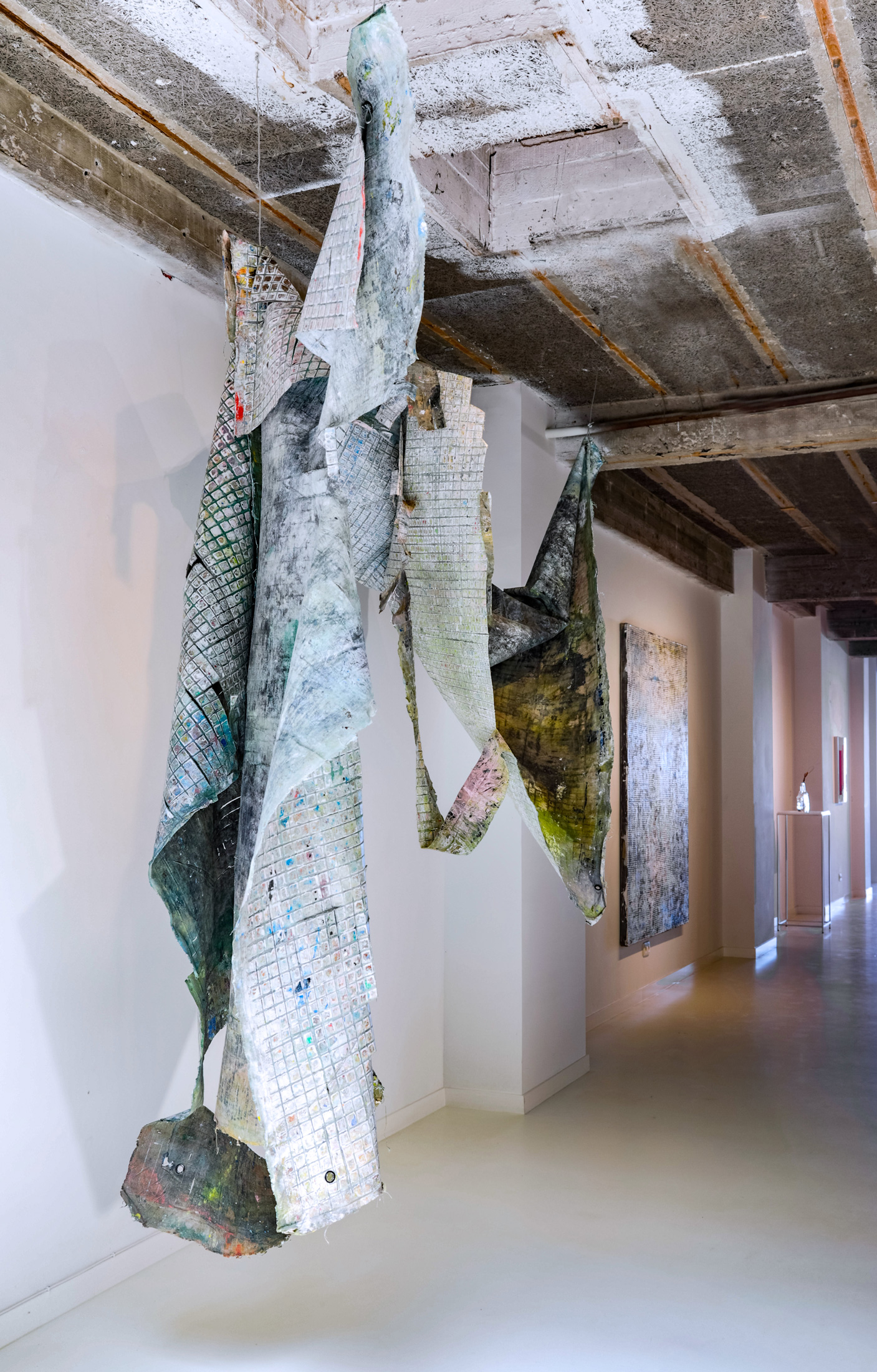 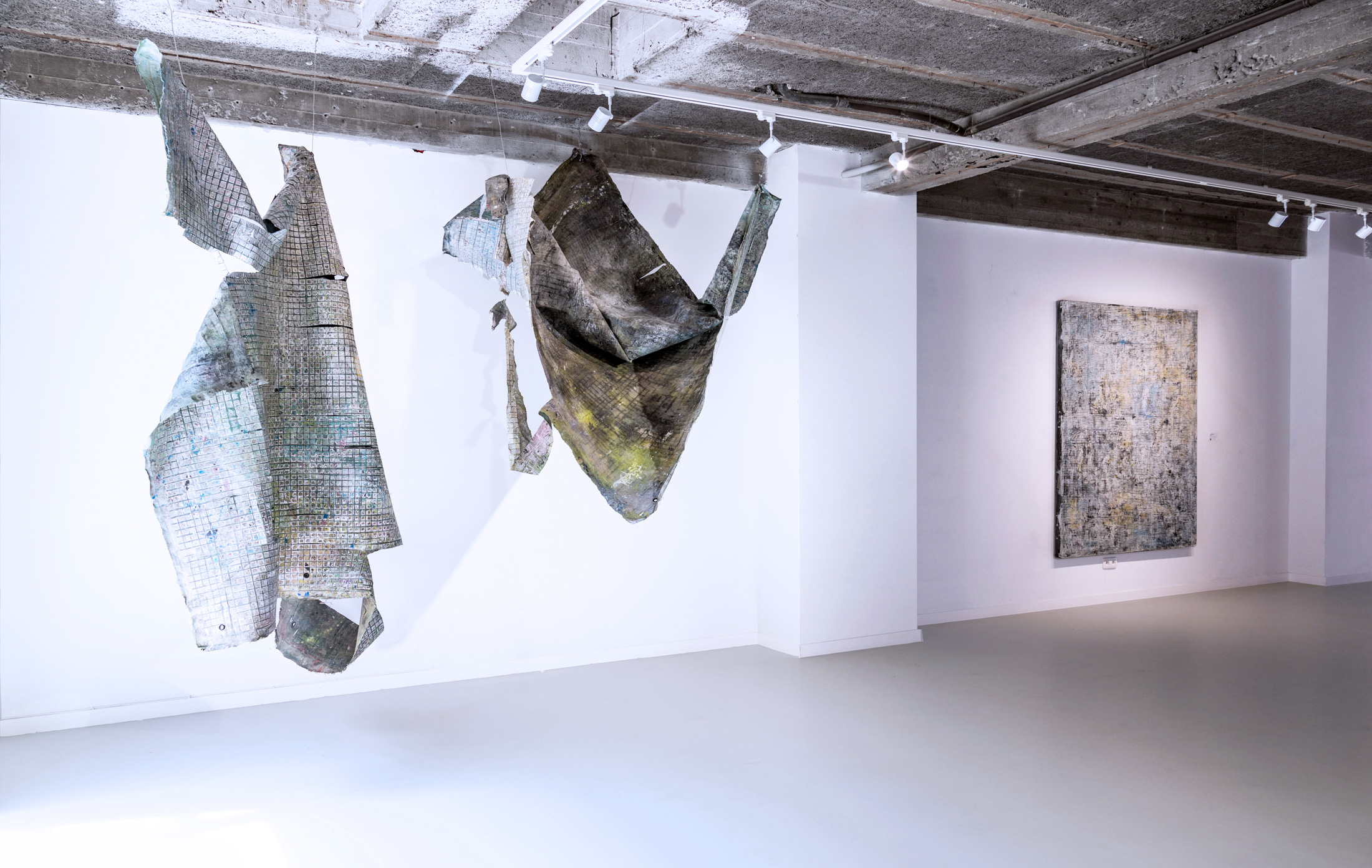 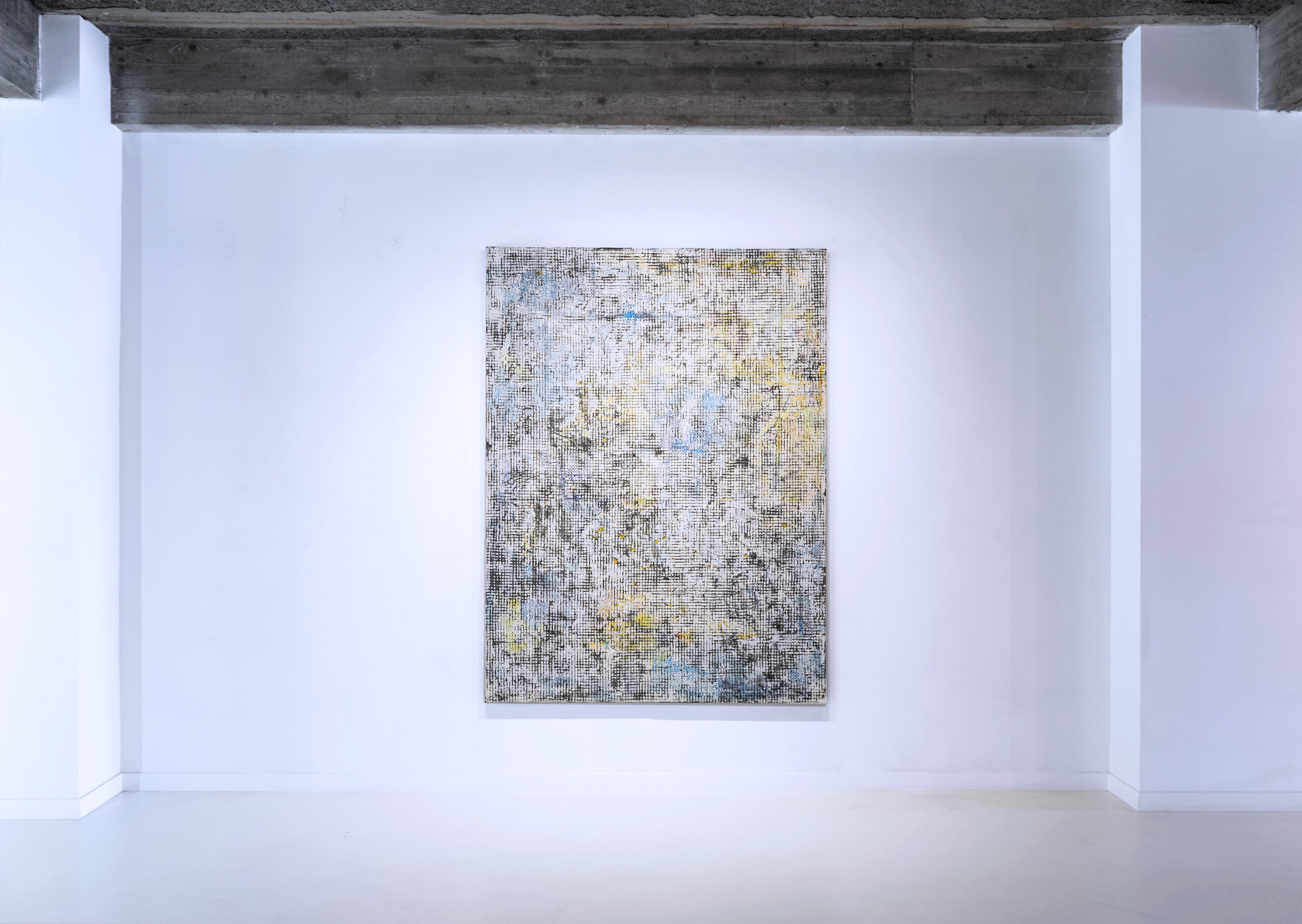 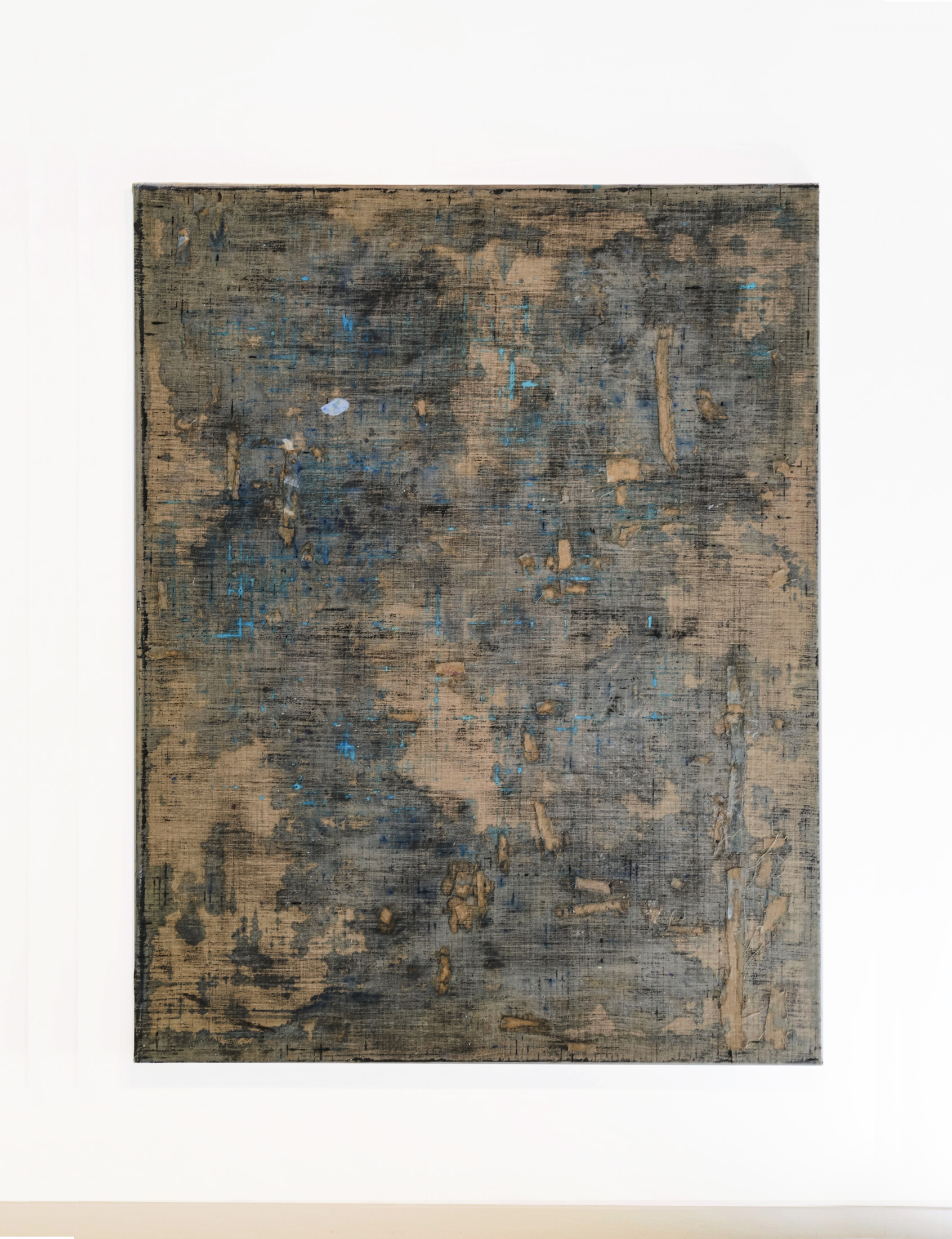 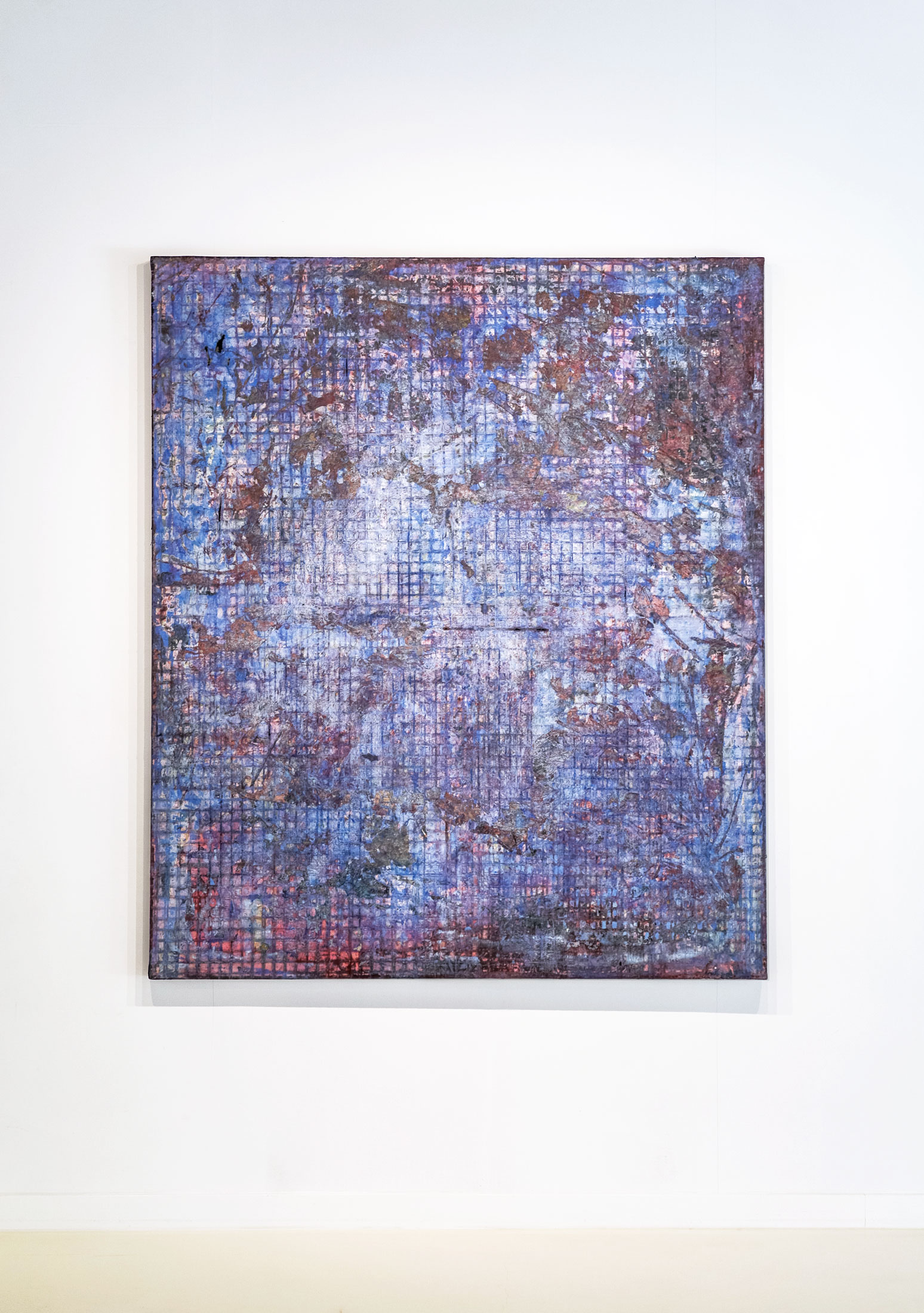 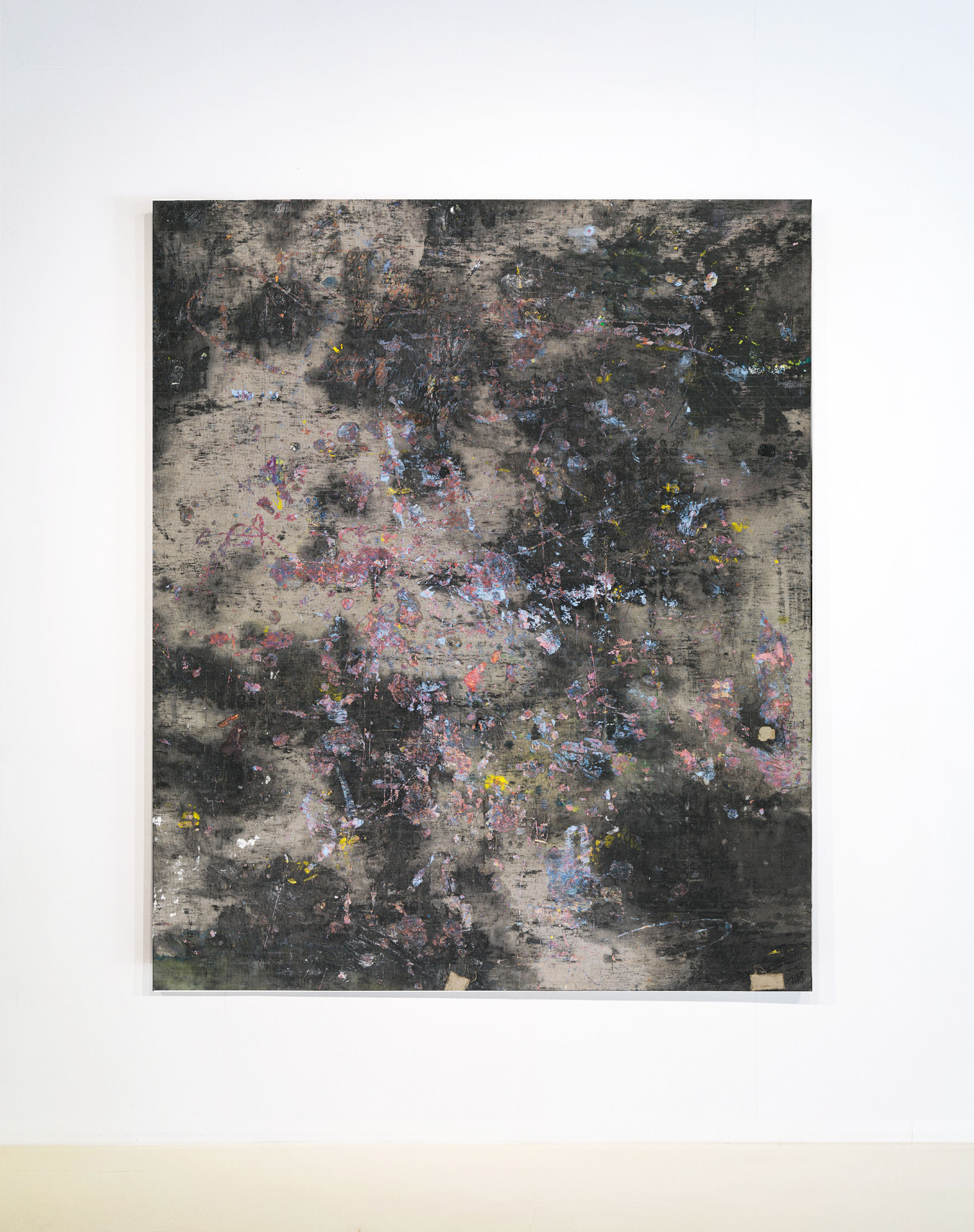 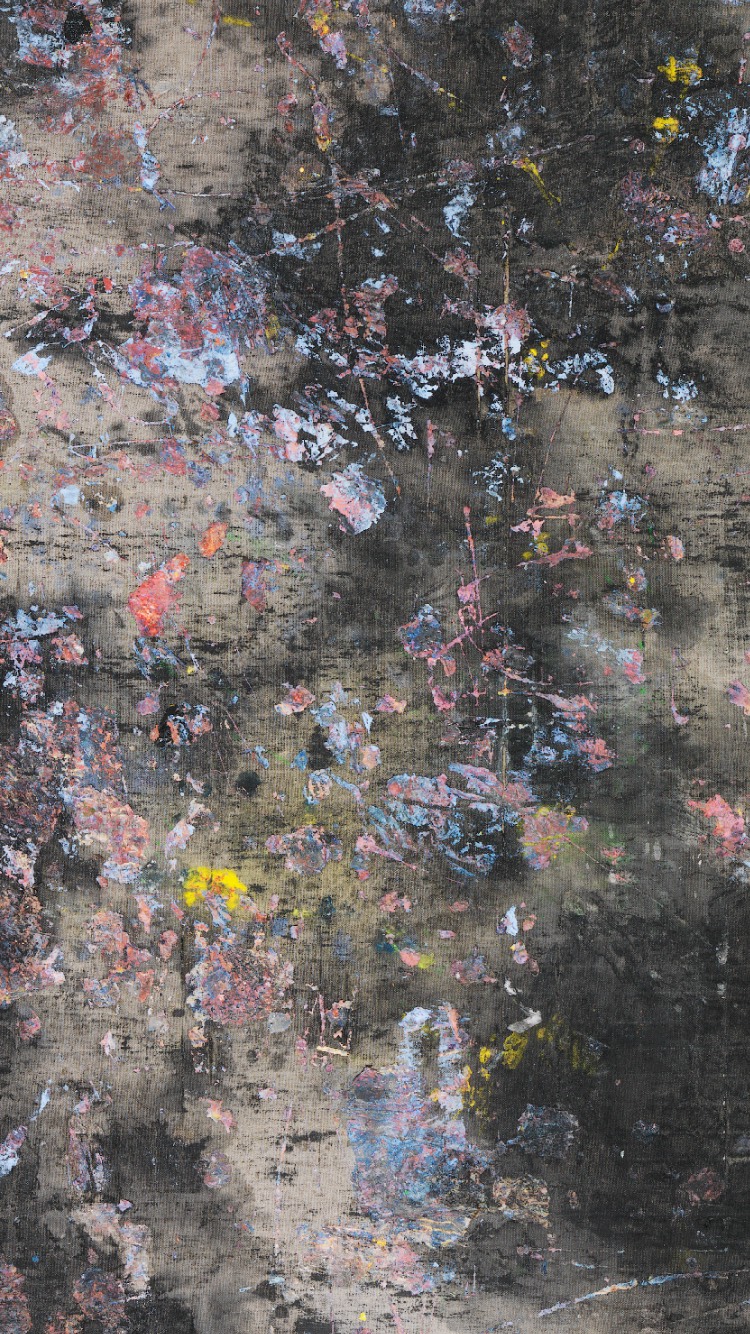 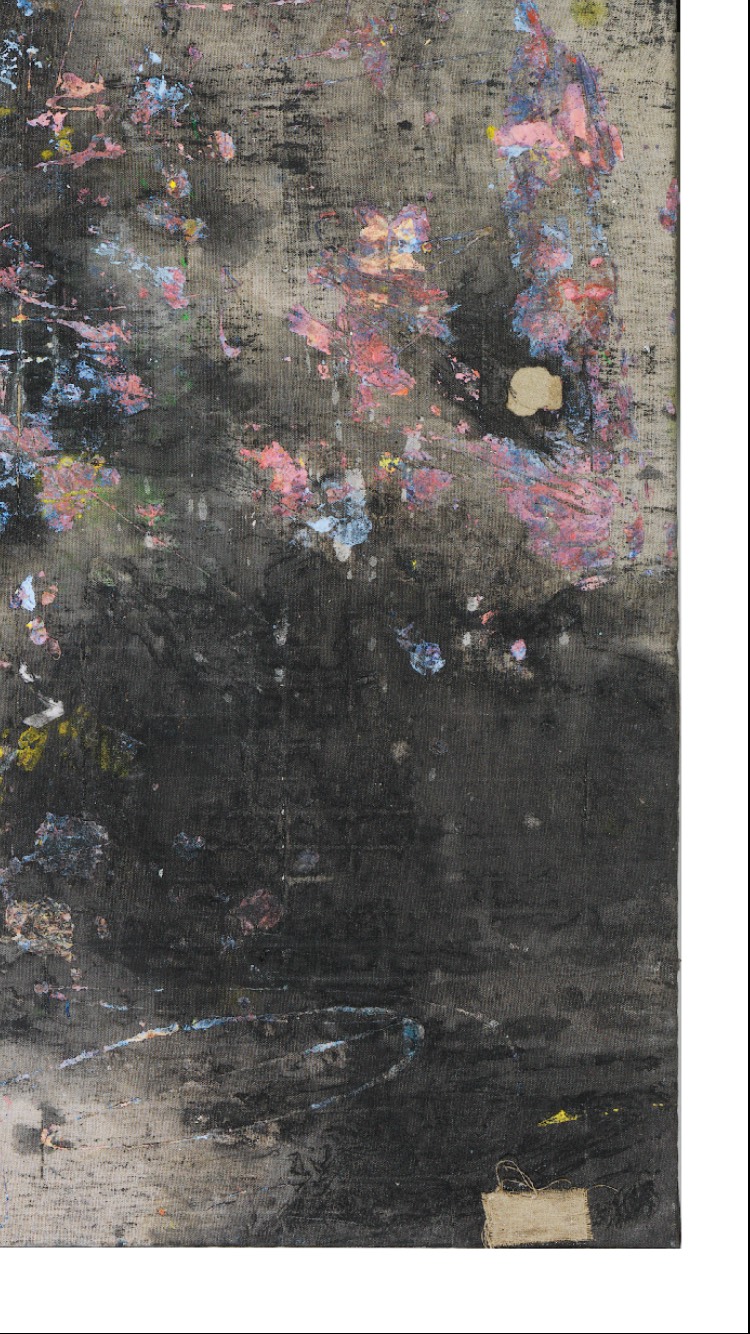 MPV GALLERY proudly presents Gijs van Lith’s first solo exhibition SUPER BEAST in Knokke. For this exhibition Gijs van Lith exhibits his latest paintings accompanied with an installation of two sculptures. The creative process, the choice of (painting) materials, and the method or strategy (often very labour intense) play an important role and are at the start of each new work. Van Lith considers the canvas on which a painting is made to be just as important as the material he uses to paint it with. For example, the structure of a grid he paints on can also determine the final result. The underlying material of the work interacts with the different aspects of the artistic process: paints, composition, colors and, just as important, the manner of working. Van Lith paints layer after layer, but also regularly scratches and rubs away ‘to the bone’, so that the skin structure of the fabric can start to show craters and caves, accumulations and holes. The work becomes a cage where fragments of time, energy, thoughts and gestures fuse. The work is all about physicality, challenging the material’s limits and exploring the body-language of the painting and its process.

This solo exhibition delves into process of creation and explores the self-made rules and strategies and its limitations. By exhibiting the back or front of the painting as finished work Van Lith’s latest work and exhibition displays a more sculptural approach towards in his paintings that allows him to create, develop and deal with his work in a dynamic and free way. The relation between process and finished work becomes interactive dialog where there is no front or back. This attitude towards his work shows a glimpse of his studio atmosphere and the freedom Van Lith permits himself in not distinguishing and holding back judgment for what is created as a result of his painting-haze – or as he calls it ‘beast mode’. In this haze Van Lith sees himself more as an animal let by his instincts and intuition. Van Lith doesn’t discriminate between conscious actions and chance, between luck and deliberate gestures. He values and evaluates all and lets them interact and collide in this exhibition. These works are an open dialog that explores the conscious and subconscious. This is his way of exploring meaning and by breaking self-made rules with a great energetic and dynamic series of work as a result.

Gijs van Lith, born in 1984, received his education at the art academy AKV St Joost in ‘s-Hertogenbosch (NL). After earning his bachelor’s degree, he obtained his master’s degree at the same academy a few years later in 2013. The work of Gijs van Lith quickly caught the attention of the artistic world; the artist has been nominated for several incentive prizes for young artists and in 2009 he won the Thieme Art Young Talent Award. Meanwhile, his work is also gaining international prominence and is being included in national and international private and corporate collections. He has previously exhibited in Düsseldorf, Brussels, London and New York, and he just showed a monumental installation during his solo-exhibition at the Kunsthal Rotterdam.